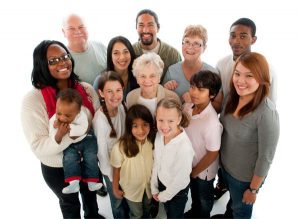 It has been estimated that 1–2% of patients with suspected acute coronary syndrome (ACS) are found to have  Takotsubo syndrome (TTS),1,2 but if only women are considered, this may be as high as 10%. It is probable that the incidence of TTS is underestimated.3  A more recent study conducted in a large urban hospital in the USA found that the ratio of non-ST-segment-elevation myocardial infarction (NSTEMI) to TTS was 24:1 (4.2%).4  With increasing awareness, TTS is becoming more frequently recognised, but there are still some subgroups of people in whom TTS is likely under-diagnosed such as those with pre-hospital sudden cardiac death,3 obstetric, surgical, anaesthetised and critically ill patients. TTS occurs in a variety of settings and contexts and can be classified as primary or secondary TTS.

Primary Takotsubo syndrome  Acute cardiac symptoms are the main reason for seeking care in primary TTS. The first point of medical contact is usually from emergency medical services (ambulance and emergency departments), acute cardiac services, or the primary care physician.   A stressful trigger may or may not be identifiable in primary TTS. A co‐existing medical condition may be present but it is not the primary cause of the catecholamine rise.3

Secondary Takotsubo syndrome TTS can be precipitated by an existing medical, surgical, anaesthetic, obstetric, or psychiatric condition that causes sudden activation of the sympathetic nervous system or a rise in catecholamines. TTS occurs as a complication of the primary condition or its treatment, and thus is known as secondary TTS.3 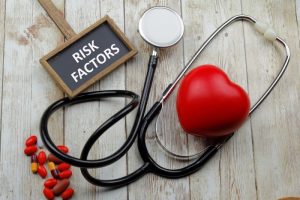 90% of reported cases of TTS are in women with a mean age of 67–70 years, but TTS can also occur in younger women, men, children and neonates.   TTS cases may be classified as primary or secondary TTS. TTS is most commonly found in women, but a diagnosis of TTS should not be excluded based on gender. With increased awareness of TTS, reported cases in men are increasing. Emotional stress or the absence of identifiable triggers are more common in women. Conversely, a physical triggering event is more common in males. Mortality is higher in males than in females perhaps reflecting the higher frequency of underlying severe critical illness and secondary TTS in males.3

Older Age
90% of reported cases of TTS are women with a mean age of 67–70 years,5 but a diagnosis of TTS cannot be excluded on the basis of age.  There have been published case reports of TTS in neonates,6,7 children,8-14 and younger men and women.15

Key pointThe index of suspicion for TTS may be higher in post-menopausal females, but TTS cannot be excluded on the basis of age or gender.

Pre-existing mental health disorders
There have been several studies linking mental health disorders and TTS.16  The International Takotsubo Registry reported significantly higher rates of affective disorders and anxiety in people with TTS compared to controls.17 A large observational study with over 24,000 patients from the National Inpatient Sample also found higher prevalence of anxiety and mood disorders in patients with TTS compared to controls.18  There are, however, some limitations in reporting psychiatric diagnoses obtained from the medical record without real-time assessment of each patient for consistency with Diagnostic and Statistical Manual of Mental Disorders (DSM) criteria that may lead to under-, over-, or misdiagnosis of psychiatric disorders in such studies.16  Explanations of the aetiology behind the association of TTS and mental health disorders is speculative in nature, but patients with pre-existing psychiatric illness may be at increased risk of TTS due to disproportionately high catecholaminergic responses and increased cardiac sympathetic sensitivity.16

Acute exacerbation of psychiatric illness19 and changes in psychotropic medications including up-titration and overdose of serotonin-norepinephrine reuptake inhibitors (SNRIs)20 have been shown to trigger TTS. 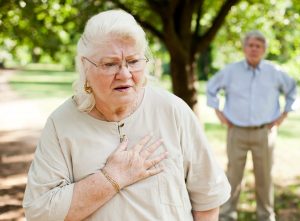 The most common symptoms  of TTS are chest pain and/or dyspnoea.  As with ACS, angina in women may not fit a typical pattern.  Less commonly, the presenting symptoms may result from complications of TTS and include heart failure, cardiogenic shock, syncope or cardiac arrest.1 Cardiac arrest as the presenting feature appears to be more common in younger women.16

With the exception of mental health conditions including stress and anxiety, traditional risk factors for coronary heart disease do not appear to be associated with the development of TTS. 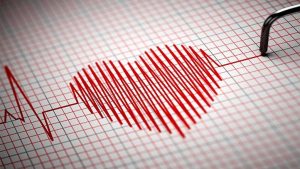 Typically there is a history of an acute physical or emotional stressor within the preceding hours/few days that triggers TTS, but approximately one third of people have no identifiable trigger at the time of presentation.  Emotional triggers vary in nature, ranging from what may be perceived by others to be a trivial event (loss of a personal item) to a life-changing event (death of a loved one). TTS can also be triggered by positive emotional events such as winning a prize, or happiness at a celebration of a birthday, wedding or family reunion).  The magnitude of the event does not appear to be the determinant of TTS occurrence. Any event that causes acute emotional stress in a susceptible individual can trigger TTS.  Physical stressors, usually in the form of acute illness, trigger around 40% of TTS cases. As with emotional stressors, there is a wide range of physical stressors that have been associated with TTS. When TTS occurs secondary to physical illness (particularly in critically ill patients), or those undergoing surgery and/or anaesthesia, patients may not experience chest pain or dyspnoea. Alternately, symptoms may be attributed to the pre-existing physical illness or surgery.

Key pointThe index of suspicion for TTS may be higher when the patient identifies a physical or emotional stress that precedes symptoms, but TTS cannot be excluded in the absence of an identifiable stressor.

Key point TTS should be considered as a possible cause of sudden unexpected or unexplained haemodynamic or respiratory deterioration17, and impaired consciousness or neurologic complications1 in patients with impaired ability to communicate due to illness or medical/surgical intervention. TTS should be considered in the setting of new troponin elevation and/or ECG changes in critically ill and surgical patients.

See the Takotsubo Wall for causes of TTS listed by people with TTS. This is frequently updated.

Drugs associated with the development of Takotsubo syndrome – CLICK HERE