Drugs that may cause Takotsubo

Drugs associated with the development of Takotsubo syndrome

Catecholamines have a central role in the development of TTS, and there are many case reports linking exogenous catecholamines to the development of TTS. Reviews suggest that adrenaline, also called epinephrine, is the most commonly used drug to cause TTS.2  Reports of TTS related to adrenaline use show that the population affected are generally younger than what is commonly reported in large registry databases.3,4  Women were still the dominant gender affected, but one study found that this was in a significantly lower percentage than general TTS population reports.4 Some of the common indications for adrenaline use are cardiac arrest, cardiogenic shock, hypotension, anaphylaxis (life threatening allergic reactions), control of superficial bleeding in dental or surgical some procedures. Routes of administration for adrenalin are inhalation, intra-ocular, topical, local irrigation, and subcutaneous, submucosal, intramuscular and intravenous injection. Multiple cases of TTS associated with uses of adrenaline and noradrenaline (norepinephrine) have been reported in various medical conditions.

Some examples of these are listed below:

Clinicians should be aware of the potential for development of TTS related to these drugs. Adrenalin and noradrenaline are drugs that are often crucial in resuscitation, managing hypotension and treating anaphylaxis.  Use of these drugs may be unavoidable, but clinicians should explore other options and use these drugs judiciously where circumstances mandate their use.

Dobutamine is the second-most commonly reported drug to cause TTS. Dobutamine is a synthetic catecholamine that increases contractility of the heart. It is used as an intravenous infusion for the short-term treatment of patients with depressed myocardial contractility. There are few reports of dobutamine being associated with TTS in this context,46 but it is possible that TTS could be masked or signs and symptoms mistaken for the underlying illness. However, there are numerous reports of dobutamine triggering TTS when used in cardiac investigations.47-62 These have predominantly occurred in the context of pharmacological stress testing when the patient is unable to exercise on a treadmill.

Dopamine is one of the catecholamine neurotransmitters in the brain and like dobutamine has been used to support blood pressure in cases of severe hypotension.  There are rare reports63-64 of association of dopamine with TTS in the context of managing hypotension, but as with dobutamine, it is possible TTS is masked or mistaken for the underlying illness.

Other cardiotonic drugs associated with cases of TTS include:

Phenylephrine, a synthetic sympathomimetic amine that acts predominantly on α-adrenergic receptors, is mainly used to treat nasal congestion, but may also be used in treating hypotension and shock and hypotension during spinal anaesthesia. It has been associated with cases of TTS in obstetrics in the setting caesarean section for anaesthetic induction-related hypotension or perioperative hypotension,68-72 but in this context, it is usually not the only drug used that has the propensity to cause TTS.  Use of phenylephrine alone has been reported in cases of TTS but is often used in combination with other drugs. Phenylephrine has also been implicated in the development of Takotsubo with nasal and intraocular use.73-44

Drugs used in the treatment of mental health conditions

Other medications used to treat mental health conditions that have been suggested to possibly have had an association with the development of TTS include:

Drugs used in the treatment of cancer

Recent studies have described an increasing trend in the incidence of TTS among adult patients receiving chemotherapy and significantly higher mortality for cancer patients with TTS compared with those with no TTS.92-94

Several chemotherapeutic agents, monoclonal antibodies, and tyrosine kinase inhibitors have been identified as possible sole culprits of TTS. The most common chemotherapy drugs associated with TTS are 5-fluorouracil (5-FU)95-114
and its oral pro-drug capecitabine.114-123

Other drugs used in the treatment of cancer that have been associated with TTS are:

Cases of TTS have been reported in the obstetric setting and is a serious complication that is associated with acute pulmonary oedema,142-150  cardiogenic shock,151 cardiac arrest,152-156 and death.  TTS can happen throughout pregnancy or later in the peripartum period, but the risk is greatest in during or soon after birthing. Peripartum TTS appears to be more common in women with pre-existing maternal high-risk features including age >35 years, multiple gestations, preterm birth (<37 weeks), multiple pregnancy and most reported cases are associated with caesarean delivery. 157  There are also reported cases associated with preeclampsia and HELLP syndrome (haemolysis, elevated liver enzyme levels, and low platelet levels) and vaginal delivery.158-159.

The development of TTS within 24 hours of delivery may be multifactorial.  In cases of hypotension induced by spinal anaesthesia, 160 the drugs given to counteract the hypotension are the likely trigger for TTS. 161 These include adrenaline, noradrenaline, dopamine, dobutamine, phenylephrine, and ephedrine.147 Most of these are given in combination so it is difficult to know whether it is one of these drugs alone or the combination of drugs, but all of these have a propensity to trigger TTS alone.  Similarly, in the setting of peripartum haemorrhage (PPH), drugs used to reduce the risk of PPH or control haemorrhage may have triggered TTS.

Ritodrine, used as a tocolytic, has also been reported as a possible trigger for TTS cases. 163-166.

TTS should be considered as a possible diagnosis if symptoms of chest pain, shortness of breath and signs of haemodynamic compromise occur, particularly during or soon after birthing. 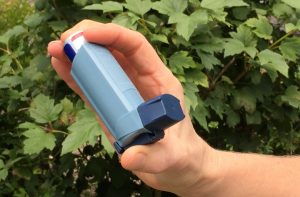 Chronic obstructive pulmonary disease (COPD) and asthma been described as potential physical triggers for TTS. Medications used in the treatment of COPD and asthma including β2 adrenergic receptor agonists albuterol (salbutamol),167-173 terbutaline174 and salmeterol175 likely have a role, but in some cases appears to be due to higher than recommended doses, suggesting that medical review of unstable asthma should be sought sooner rather than taking excessive doses of β2 adrenergic receptor agonists.

Other drugs used to treat asthma and respiratory disease that have been possibly associated with TTS onset are:

Other drugs that have possibly been associated with TTS are