Takotsubo syndrome (TTS) is not a ‘new’ condition and has likely always existed, but not been recognised. There have been a few publications describing the signs and symptoms seen in TTS for decades.  These publications described a ‘stress cardiomyopathy’.  In 1990, Japanese researchers described the entity as ‘Takotsubo cardiomyopathy’ and published case reports.1 It was a decade later that cases began to be reported in Western countries.

Figure 1: The normal heart and structures 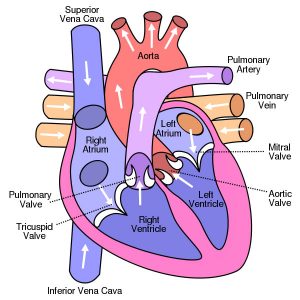 In a normal heart, the left ventricle contracts strongly and uniformly to eject the blood out of the heart to supply the rest of the body.

The heart in Takotsubo syndrome

Commonly recognised forms of TTS are shown in Figure 2. 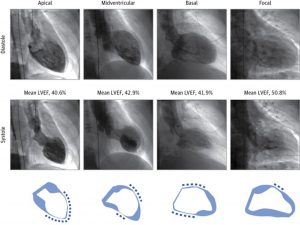 There are other variants of TTS for which the prevalence is unknown. This may be because they are rare, or alternately, they may be poorly recognised.  These variants include:

In the initial phases of TTS, the EF is reduced below 50%. When the EF is very low, it can cause people to feel short of breath as the blood accumulates in the left ventricle. In severe cases where the ventricle cannot pump strongly enough to eject blood out of the ventricle, blood may backlog into the lungs causing a condition known as ‘pulmonary oedema’. TTS usually affects the left ventricle, but in some cases may affect the right ventricle.3 Recent research suggests it may even temporarily affect the function of the top chambers of the heart (the atria) also.4

Other names for Takotsubo syndrome

TTS has been given several names since it was first recognised – in fact, more than 75 different names have been used in various publications to describe this condition.5 The reason for the name changes is that as we have learned more about the condition, the previous names did not correctly describe the condition. The table below shows the most frequently used names that have been used for TTS. 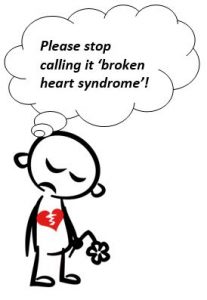 ‘Broken heart syndrome’ is easy to remember and has more appeal for the general community compared with  the name ‘Takotsubo syndrome’. Thus, it is a popular term used in the media for TTS, but it is a misnomer.  It leads to an incorrect assumption by those that do not know much about the condition, that TTS is related to lost love or disappointment in a romantic relationship, and this can cause frustration for people with a physical or unidentified cause of TTS.  Although lost love, or loss of a loved one, has been known to trigger TTS, this is but one context in which TTS occurs.   Some people feel that the term ‘broken heart syndrome’ diminishes the clinical credibility of  TTS and leads some health professionals to be dismissive of the condition, particularly in women.

Several explanations as to why TTS occurs have been proposed, but as yet, there is no full explanation that accounts for all cases of TTS. Our understanding of TTS changes as more cases are identified and more information becomes available. For instance, it was initially thought that TTS only occurred in postmenopausal females, so researchers were looking for an explanation relating to female hormones. Now that we know TTS occurs in men, younger women and children, we have to explore different mechanisms. It was also thought that TTS only affected the lower part (apex) of the left ventricle, and so researchers thought that there may be something different about this section of the heart. Now we know that TTS can affect any part of the ventricle and so researchers have had to move on to other theories. Other explanations have been presented and dismissed as evidence has not supported them. It will take time to fully understand TTS and work toward finding preventative therapies and effective treatments, but there have been some important research findings over the past few years and progress is being made. If you would like to know more about this, visit the page on ‘Proposed causative mechanisms’ or CLICK HERE.

For some people who experience chronic stress, the fight-or-flight reaction stays turned on and disrupts body systems and processes such as the immune system, digestive system, reproductive system and growth processes. Chronic stress increases the risk of developing health problems such as heart disease, mental health disorders, headaches and sleep problems.

Emotional triggers may be associated with severe emotional upset such as the death of a loved one or extreme fear due to a life threatening event. TTS can also be triggered by psychologically stressful events that seem far less extreme, such as an argument or loss of a personal possession. TTS can even be triggered by a happy event that triggers strong emotions, such as a family reunion or a lottery win.

Physical triggers for TTS include medical illness, extreme exertion or exercise, physical trauma, heat stress, medical tests and procedures, surgery and anaesthesia and some medications.  In some cases it may be that a combination of psychological and physical stress can trigger TTS. TTS triggered by underlying medical illness or trauma has led to the concept of ‘secondary’ TTS. In other words, a person already has a medical illness or trauma, and TTS occurs secondary (or as a result of) the existing illness.

The determinant of TTS occurring is not the actual stressor, but rather the individual person’s response to it. Everyone experiences some degree of emotional and physical stress during their lifetime, but not everyone has an episode of TTS.  It is not clear why some people, and not others, develop TTS whilst others who are exposed to the same type of stressor do not.

For further information on triggers that are known to be associated with TTS, visit the ‘Associated triggers’ page, or CLICK HERE.

Who gets Takotsubo syndrome? 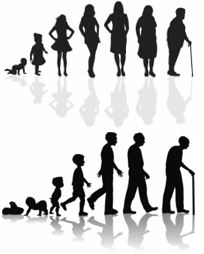 It was first thought that TTS only affected post-menopausal women, but cases have since been reported in younger women, men, and even in children and neonates. Although it appears that TTS can occur in males and females across the lifespan, around 90% of reported cases to date occur in post-menopausal women.8 Males more often have a physical trigger for TTS, such as acute medical illness or trauma, and usually have worse outcomes when compared to women.14