This video gives a short explanation of the HPA axis.

How the stress response is triggered

Here is a very basic overview of the communication loop between the brain, the mind and the body.

When the stress response is activated, a cascade of stress hormones is released; the main ones you have heard of being adrenaline (epinephrine), noradrenaline (norepinephrine) and cortisol.

A stressor is perceived in the higher brain centres and the first response to a threat, be it physical, emotional, cognitive or imagined, takes place in the amygdala, a deep-seated almond shaped cluster of neurons located in the limbic system of the brain. The amygdala directly influences the sympathetic nervous system and very rapidly sends a message to another part of the brain called the hypothalamus. Here a hormone called corticotrophin (CRH) “the emergency messenger molecule” is released and this, in turn, signals the neighbouring pituitary gland to release adrenocorticotropic hormone (ACTH) - “the master brain-body messenger molecule“ - within approximately 15 seconds into the bloodstream. ACTH then travels throughout the body creating responses in the heart, lungs, liver and brain in about 20-30 seconds.

Following the release of ACTH, messenger cells in the cortex of the adrenal glands are triggered to produce and release adrenaline, noradrenaline and a few minutes later cortisol resulting in a further increase in cardiovascular and pulmonary tone.

As already mentioned, within a few hours of the “stressor“, we need these levels to reduce and stabilise to bring the body back into a state of homeostasis and allostasis. In modern day life, these stress levels can all too often stay elevated. We can get anxious and preoccupied about what might or might not happen in the future, over-ruminate over negative events in the past; the brain not knowing the difference between what is real and what is imagined! Even though we no longer have that threat of being chased by the tiger (an incident with high acute stress) the threat might be ongoing: an aggressive boss, worry over financial matters or an illness. Everybody’s tipping point will be different.

However, we do need cortisol in our bodies! In a healthy release, the cortisol curve is higher in the morning, helping us to stay focused during the day and gradually tapering off through late afternoon and at its lowest during the night. 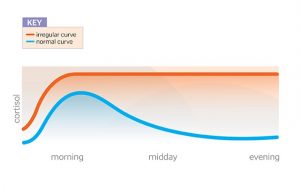 When we have ongoing anxiety and stress, the cortisol function runs into overdrive, being released at all hours thereby overriding the natural rhythm.  Negative effects over a long period of time can also affect the immune system, inhibit bone remodelling thereby increasing the risk of osteoporosis and alter perception and emotion in the central nervous system.

Negative effects over a long period of time can also affect the immune system, inhibit bone remodeling thereby increasing the risk of osteoporosis and alter perception and emotion in the central nervous system.