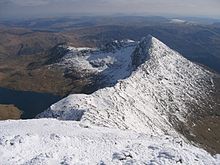 She was working as a prison officer and was physically fit, active and mentally strong. Diane  was planning to climb Snowdon with a group of people to raise funds helping to fund raise for a hospital where her son was treated. Snowdon is the highest mountain in Wales, UK.
Takotsubo trigger
Diane did not think that climbing Snowdon would be a problem, but she found the climb more difficult than she expected and the last half hour was torturous. She had to keep stopping as she simply couldn’t get her breath. She had never had this before and it scared her a bit, but she pushed through it and made it. She even had a bit of jaw ache but after a rest in the cafe at the summit she felt ok. The descent was easy, though her hands kept getting numb and tingly.
Diane went to bed early after a soak in the bath as she was exhausted – it took 3 and a half hours to climb up and over 2 hours to get down.
The next day Diane woke up early, about 5am, and felt unwell. She was not sure what was wrong, but she felt shaky and a bit sick. After a bath Diane felt worse. Her jaw was aching and as well as both arms. She thought “this must be to do with my heart”. She woke her husband and told him that she wasn’t well and decided to ring the health helpline (NHS). They told her to go to the hospital emergency department as she probably had angina.
Medical Management
Diane’s husband drove to the hospital. The hospital reception had been informed and were expecting her. TFive minutes after arrival she was called through to triage. The male nurse listened to her story and checked her blood pressure and pulse. The nurse looked concerned and called the  resuscitation (resus) coordinator. When Diane asked what was going on, she was told “Diane your pulse is only 30 I need to take you through to resus – do you need a wheelchair?” That frightened her but she said she could walk.
Diane was put on an ECG monitor, blood tests were taken, and she had frequent ECG and blood pressure checks. The staff kept asking if she was in pain. After Diane had been in ED for a few hours and the blood tests came back, the doctor told her that she had had a heart attack due to a blockage in an artery of the heart. Diane was horrified and cried – she couldn’t believe it as she thought she looked after herself really well. When they asked had she got any pain she said that she could feel pressure on her chest. The staff arranged a transfer to a specialist hospital and told Diane that she would have a stent to open the blocked artery. Diane was terrified and her husband was in shock. He rang family and friends to tell them. Diane was ‘blue-lighted’ by ambulance to Glan Clwyd hospital about 50 miles away. The ambulance man that was looking after her calmed her down. The cath lab team were waiting for her and she was taken straight to the cath lab where an angiogram was done via a radial approach (the wrist). It was painful and Diane was very frightened. Then she was told that there was no blockage which left her happy but confused. An echocardiogram was done which confirmed TTS. A nurse explained what TTS was and told her that she would be ok and that she would recover completely. Diane and her family were very relieved and happy. Diane’s troponin at hospital presentation was 2513 and it rose to 4851. Her presentation ECG showed ST-segment elevation in leads V2-V3.

Discharge medications
Diane stayed in the cardiac care unit for 2 days and was discharged with with 2.5mg ramipril and 2.5mg bisoprolol, both once a day. She was booked for follow-up 4 months later.

Life after Takotsubo syndrome
For the first few weeks Diane was very tired and felt sick, with some palpitations She could barely walk and felt like an old woman, but was just glad to be alive.
Diane was referred to cardiac rehab and at her first appointment told the nurse how she was feeling. The nurse did an ECG and took Diane’s pulse. Her heart rate was very low and the bisoprolol was reduced to 1.25mg per day. Diane felt better in the following weeks, but her palpitations increased (up to 40 episodes a day). She mentioned this at her next cardiac rehab appointment and her ramipril was increased to 5mg per day. The palpitations gradually stopped over the next few weeks. Diane had also been referred to an occupational therapist for stress management on a 1:1 basis.

Diane had a follow up echocardiogram  which was normal, but noticed a few palpitations while being scanned. A week after the echocardiogram she attended the human performance lab to see if she was ok to attend the cardiac rehab exercise group for 8 weeks (1 session per week). She completed the exercise program and found it very helpful. Allied health speakers presented each week on a topic such as diet and Diane found the program very helpful. Diane did start going to the local gym, but it was so busy, and she did not find it helpful so stopped going.
As the weather turned cold, Diane started getting numb hands and feet. She was told to cease the bisoprolol in case it was a symptom of Raynaud’s syndrome and she felt better once the beta blocker (bispoprolol) was ceased.

There was some delay in getting the follow-up appointment with her cardiologist, and after some time Diane visited the GP as she did not fell right. The GP prescribed felodipine as her blood pressure was elevated. Diane was disappointed and felt that this was a backward step in her recovery, so she increased her exercise regime. She walks her dog 4-5 times a week for an hour so and started doing Pilates and yoga (two short sessions per day).

An annual GP check showed that blood pressure is good, but cholesterol was high which disappointed Diane. She feels that life has changed so much since TTS. Pre-TTS she thought that she was really fit and healthy, and now she feels that she must work so much harder to keep healthy. However, she is grateful to still be here, and her goal is to be free of all the medications.
Key point If beta blockers are prescribed at hospital discharge following TTS the patient should be carefully monitored for side effects. The cardiologist should notify the GP of this, as well as indications for ceasing beta blockers in TTS patients.