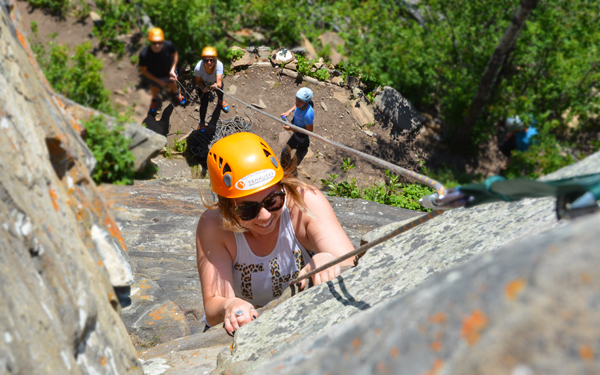 Laura had no underlying conditions or illnesses, other than having had a partial thyroidectomy (part of the thyroid removed) several years before and she was taking levothyroxine. Just before the episode of TTS, Laura felt the fittest she had ever been in her whole life. She was working out with a personal trainer weekly, going to the gym three times a week, and doing indoor and (sometimes) outdoor climbing.

Laura had some background stress as she had been worrying about her son going away on a trip.  On a Sunday morning, Laura, her husband and son went away with their local climbing group to do some outdoor climbing. Laura’s managed her climb but felt that she had used vast amounts of adrenaline and it took all her strength and a great deal of effort.  She was exhausted.  As Laura came down from the climb. As soon as her feet touched the ground, she experienced a sensation of something being “washed over the inside of her chest”. Then she began to feel a pain in the centre of her chest which “felt as if it was locked in a metal box in the centre of my chest”. Laura began to feel nauseous and had a sense that something was very wrong.

Laura and her family found the local hospital after an hour. She was given a nitro spray which had no effect, then painkillers which helped. Although she had no pain, she could still feel the sensation in her chest going on. Her heart rate and blood pressure had been taken but did not show anything too odd. No blood test was taken, and she was released from the hospital 6hrs later and told to see her GP the next day if there were any problems. At 9.00pm that night when the painkiller wore off Laura’s original pain came back immediately. She began to feel quite ill very quickly. After phoning a health helpline (NHS 24) they phoned for an ambulance.

Paramedics did an ECG and told me there was a slight spike in my heart rate, but nothing of great significance, although the paramedic did feel it was the heart. That night the hospital admitted me to an observation ward and took a blood test. Very early next morning a doctor wakened me to tell me I had had a heart attack. Then the shock, disbelief and fear set in.

Investigations in the hospital

Later that day I had an echocardiogram and an MRI scan. Unknown to me at the time the hospital knew very little about TTS and thought a mistake had been made when my arteries were found to be clear. I was treated in the meantime as any other heart attack patient. Next day the Consultant gave me a basic printed leaflet on Takotsubo and told me I would be discharged within a day or two. Very little information was given to me. I was then visited by the head heart nurse who tried to answer my questions. I told her after a few weeks I would probably have a mountain of them. She told me she had persuaded he doctor to let me attend physical rehab as she felt this would help me as I was an extremely active rock climber and gym goer. I was also told there would be no follow up appointment with the Consultant as my heart would heal within a few weeks and this would never happen again. I was angry, upset, disappointed and made to feel by the Consultant I was taking up a bed unnecessarily. However, another heart consultant at the hospital had been given funding for heart research and decided then to research Takostubo. This was Dr Dana Dawson. (I agreed to take part in this study and in the October I was given another MRI and told my heart was in good condition.)

Next day the wonderful heart nurse went over the medication I had to take. Rampiril, Bisoprolol, simvastatin, aspirin and Omeprazole. I went home feeling all alone and devastated, but was lucky to have the love and support of my son, husband and whole family.

I recovered very quickly, going out for small walks then walking for a little longer each day. I started the heart rehab 6 was later. I had between this time gone to my GP to start up a repeat prescription for my meds. My GP knew nothing about Takostubo either, but he listened to me intently and gave me lots of support. Unfortunately, as I had lost all confidence in my body and the meds were giving me side effects, I was at the doctors every other week, but I was never made to feel I wasted his time.

Seven years on, constantly fearing I might have another attack and fed up of living with the side effects of the meds, there was an article in my local newspaper by Dr Dawson who was talking about her findings after six years of study. I was afraid and shocked to read that this could well happen again, and many people’s hearts did suffer muscle damage. I could not shake my fear, so I emailed Dr Dawson and outlined my case. She immediately invited me for an echocardiogram, ECG and a meeting with her. I was over the moon and this all happened within a couple of weeks.

The results were good, and she could not anticipate any future problems, but she was very surprised to find I was still on all the medication and said I should have been taken off all meds after a few months. My GP’s only instruction was to prescribe the meds and no time limit was given. Once again I was furious that I had been discharged from the hospital with no follow up and no specific instructions to my GP. I gradually came off all the meds and began to feel emotion again. Unfortunately, years of being on these meds left me feeling I had been emotionally robbed of seven years of my life and was fed up of living my life without emotion. I do feel Takotsubo patients should be given mental health support as well as physical. Now medication free, nine years on I am ready to begin the next chapter of my life, confident, happy and feeling healthy. Dr Dawson’s team have contacted me a few weeks ago and they are now looking into the genetic predisposition for Takotsubo. One of her team is coming to my house next week where I will give a sample of blood. The results for this should be interesting.

Key point Pain-relieving medication does just that, but it does not mean that the underlying condition has resolved. In Laura’s case, the pain-relief medication that was administered masked the underlying symptoms. Together with not taking troponins and an ECG, Laura was fortunate that she did not come to harm. Health professionals must follow best practice guidelines in the assessment of chest pain.

This story also illustrates how people with TTS can feel abandoned when discharged from hospital without medical follow up. Also, it highlights that many GPs do not know how to manage patients following an episode of TTS and they need to receive instruction from the treating cardiologist.