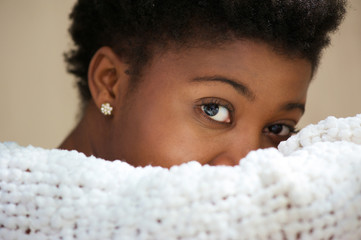 Nadia was a healthy and happy 36 year old with 3 children and a loving husband.  She had a hysterectomy due to endometriosis and started hormone replacement therapy at age 31.   At the age of 33, Nadia started to have unexplained chronic chest pain.

Medical Management
Fortunately for Nadia, the paramedics were there and able to perform cardiopulmonary resuscitation (CPR) and defibrillation with an automated external defibrillator (AED). An angiogram was performed on arrival to the hospital that showed TTS with an ejection fraction (EF) of 35%.  Nadia had aspirated (inhaled secretions/vomitus) in the ambulance and spent a total of 11 days in the intensive care unit (ICU). For the first three days she was sedated and on a ventilator.  Magnetic resonance imaging (MRI) on the 10th day following TTS onset showed that her EF had returned to normal limits (50%) and the acute changes in her left ventricle due to TTS had resolved, but there was still evidence of a cardiomyopathy.  An electrophysiological (EP) study was performed to try to simulate the arrhythmia that had led to Nadia’s cardiac arrest (in a controlled hospital laboratory environment), but no arrhythmia was generated.  A decision was made to do further testing after hospital discharge before deciding whether an implantable cardioverter defibrillator (ICD) was necessary.  After all of the testing that was done in the hospital, the primary cause of the event was still unknown.

Progress after hospital discharge
Following discharge from hospital, Nadia had severe and constant chest pain which she put down to having had CPR.  It gradually got better but still occurs intermittently, as it did before her cardiac arrest. Her post discharge medications include aspirin, an antiplatelet, beta blocker, ace inhibitor, calcium channel blocker and antidepressant.  Although Nadia initially had her hormone replacement therapy (HRT) stopped on the hospital, she was told by the cardiologist four weeks later that low oestrogen levels may be a contributing factor in the development of TTS, and was told to begin taking them again.  Nadia was pleased to restart HRT as she had been experiencing symptoms of menopause, including hot flashes and sleepless nights. Nadia began cardiac rehabilitation (CR)   four weeks after hospital discharge and returned to work six weeks after discharge.  Her echocardiogram at three months showed an EF of 55%, and this was confirmed by an MRI two weeks later, but it appeared that Nadia had cardiomyopathy.  Nadia was referred to an electrophysiologist (cardiologist who specialises in diagnosis and management of abnormal heart rhythms) and he recommended that Nadia have an ICD. Nadia had the ICD implanted with no complications.

Life after Takotsubo syndrome
Four months after Nadia’s TTS event, she was still experiencing chronic chest pain and she has been back to the Emergency Room (ER) on two occasions, but was released after 24 hours observation both times.  Nadia still experiences debilitating extreme fatigue and has intermittent dizziness that is sometimes severe enough that she contemplated going to the ER, but decided against it.  She has some mild short- term memory issues due to the cardiac arrest, but nothing too severe.  Nadia does her best to exercise but the extreme fatigue makes it difficult.  She finds the support from online groups for cardiac arrest survivors, people with ICDs, and the TSG useful, particularly in answering questions and being able to talk to people who have had a similar experience.